Your exciting Himalaya experience is in safe hand 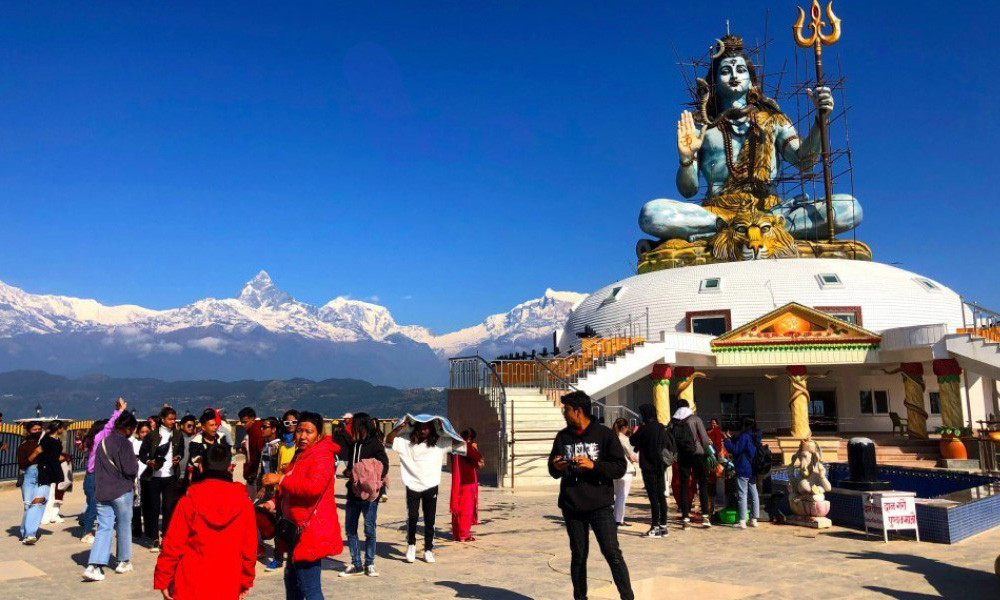 Pumdikot Pokhara
Returning to the north from Pokhara, Pumdikot, which overlooks the lake, mountains and Pokhara city in the same meso, was obscured till a few years ago. When the locals tried to attract tourists by building a view tower, things did not go as planned. Tourists arrived only sporadically. The identity of Pumdikot has changed after the huge Mahadev statue was erected during the Corona epidemic.
A crowd of domestic tourists was seen on Wednesday at the huge Mahadev statue complex in Pumdikot
There is pressure of domestic tourists in Pumdikot without completing the construction of the statue. The crowds of domestic tourists who reach Pumdikot on Fridays, Saturdays and other holidays are overwhelming. Domestic tourists coming to Pokhara from different parts of the country reach Pumdikot. On social media, there is a flurry of 'viral' tickers in Pumdikot.
With the increase in tourist pressure, locals have started opening hotels, restaurants and grocery stores. Old houses are being demolished and hotels and restaurants are being built. It can be seen that every house is being charged for parking. Entrepreneurs from Pokhara and Kathmandu are also investing in building hotels and resorts in Pumdikot.

To reach Pumdikot in Ward No. 22 of Pokhara Metropolitan City, one has to pass through Chhorepatan, World Peace Stupa. A 51-foot-tall statue of Mahadev is placed at Pumdikot, above the World Peace Stupa, facing south. The locals have formed Pumdikot Development Committee to develop it as a religious tourist destination.
Apart from the statues, statues of Kumar and Parvati, Sumeru mountain, greenery park, organized parking and statues of various deities are under construction. One hundred and eight Swargadwari staircase, disability-friendly slope road, office building, ticket counter and toilet building are being constructed. He is also the chairman of the Vishal Mahadev Statue Construction Committee. ‘We plan to accommodate tourists in Pumdikot for one night by performing Tandava dance at night.
The 51-foot-tall statue on the throne is made in Mathura, India. The committee had earlier planned to build a 189-foot-tall statue. As the international regional airport is also under construction in Pokhara, it has been reduced to 51 feet due to the inability to build a tall structure on the air route.
The various parts of the statue were connected by the Indian Kaligarh with the help of elevators and cranes.